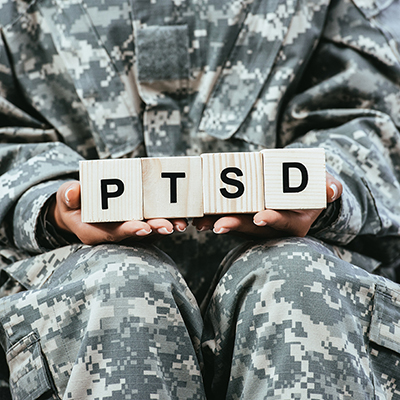 Post–traumatic stress disorder, also known as PTSD, is an anxiety disorder caused by a traumatic event. People who witness or experience an event that triggers intense horror, helplessness, or fear, sometimes develop PTSD as a result.

Just because you experience trauma, doesn’t mean that you’ll definitely develop PTSD; most people are able to recover from their experience through effective coping methods over time. However, some people find that they can’t heal on their own – symptoms worsen and are severe enough to interfere with daily life. In these cases, the person is usually diagnosed with PTSD.

Additionally known as shell shock, battle fatigue, or post–traumatic stress syndrome, PTSD affects those who have served in combat and those who haven’t. Traumatic events such as violence, rape, abuse, and natural disasters can also be triggers.

What Are the Symptoms of PTSD?

Symptoms of PTSD usually appear within three months of the trauma, but sometimes there’s a delayed reaction. Some people have no symptoms for years until stress or something in their daily life triggers the memory. Symptoms include:

It’s best to start PTSD treatment directly after symptoms appear. Treatment may include medication (such as anti-psychotics, anti-anxiety drugs, and anti-depressants) or psychotherapy and counseling. Some people have found good results with an alternative therapy involving eye movement desensitization and reprocessing. But can I get Social Security Disability benefits if I have PTSD?

Is PTSD Considered a Disability?

Cases involving post–traumatic stress disorder may be approved by the Social Security Administration if they meet criteria in the Blue Book or through a medical–vocational allowance. Most PTSD cases are approved through the latter. If your symptoms are less severe than the listing, you may still be awarded a medical allowance if you are prevented from working at your former vocational position and from working at another position that would pay you a substantial income.

How Do I Get Social Security Disability with PTSD?

Always include detailed descriptions of your anxiety reactions in any medical records that you present for your disability claim. Describe the frequency, duration, and nature of your reaction and how it affects your ability to function. Also, include other factors that make your anxiety reaction worse and indicate whether your doctor agrees with these observations.