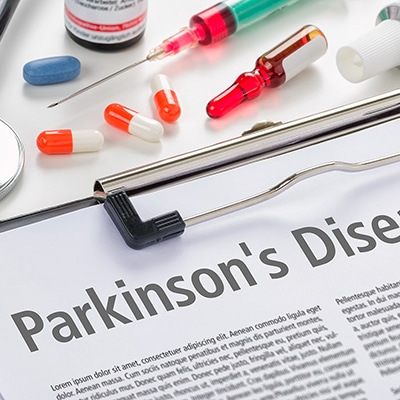 The formal definition of Parkinson‘s Disease from the Parkinson’s Foundation explains the condition as a “neurodegenerative disorder that affects predominately dopamine-producing (‘dopaminergic‘) neurons in a specific area of the brain called substantia nigra.“ It is, by its nature, a progressive condition that manifests over many years. The way the symptoms emerge is different from one person to the next, but most experience one or more of the following:

What causes it? Experts are still unclear, and there is no cure yet available. Symptoms can be addressed through an array of treatments and medications, but those who experience it may be disabled or even die from its complications.

Is Parkinson’s a Disability?

As noted, Parkinson‘s is progressive, and someone diagnosed with it may find they can work just as they have always done. However, there will come a time when symptoms interfere with capabilities, and that is when most qualify for SSDI or Social Security Disability Insurance.

The Social Security Administration has created a guide known as the Blue Book that outlines the many conditions that can qualify an individual for SSDI benefits. When the condition is Parkinson‘s, the list of medical criteria is rather brief and includes all of the symptoms above.

There is no single test that documents an individual‘s qualification, but if the “cardinal symptoms,“ such as tremor and rigidity, are present, it is often a sure thing that they are going to qualify. Getting an official diagnosis is often the first step in getting benefits. When a physician can document the “marked“ physical problems and limitations of the condition (such as inability to control the movement of two limbs after three months of treatment, or issues with thinking or completing tasks) qualification is almost a certainty.

What if your symptoms have not progressed to a level that automatically qualifies you for SSDI benefits? There is always the reduced Residual Functioning Capacity (RFC).

When someone has Parkinson‘s Disease, but the symptoms don‘t yet meet the guidelines for a disability benefit, they can obtain medical vocational allowances. These are issued when you can demonstrate that the condition is severe enough to limit your abilities in basic, work-related activities.

Your doctor can identify your symptoms and issue opinions; they can also do the RFC report that lists the things you can do and those that you can no longer perform. If you are suffering cognitive or mental disability from Parkinson‘s, they also have a mental RFC done. Factors like your condition, age, skills, and many other issues are reviewed in the RFC report, and then a determination is made as to the financial support you should receive.